This article originally published on USGA.org on May 15, 2019. 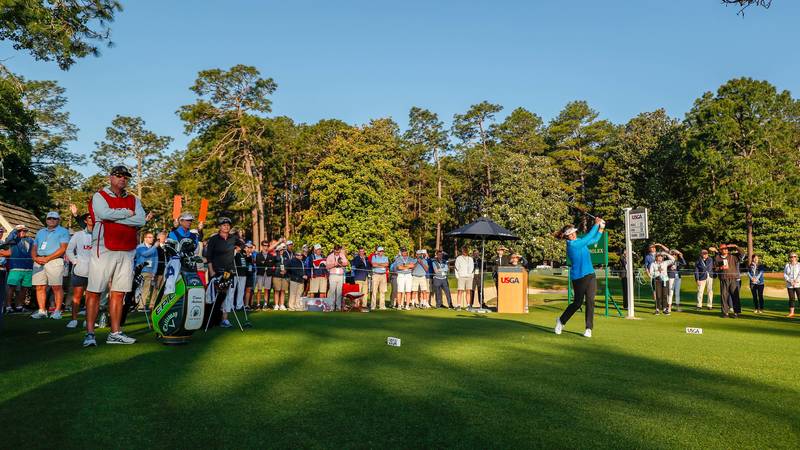 Armed with a lifetime of experience on the golf course and on the practice tee, Donna Andrews will compete in the 2nd U.S. Senior Women’s Open Championship this week at Pine Needles Lodge & Golf Club with an often undervalued commodity: perspective.

Andrews, 52, is a six-time winner on the LPGA Tour and a major champion, having taken the iconic leap into Poppy’s Pond upon winning the Nabisco Dinah Shore, now known as the ANA Inspiration, in 1994. In 15 U.S. Women’s Open starts, she collected four top-10 finishes, including a tie for second in 1993, one stroke back of champion Lauri Merten.

Even with her strong competitive history, the Pinehurst, N.C., resident who will hit the first ball of the championship on Thursday has a different metric for success this week.

“For me, probably just keep a great attitude while I’m out there, to go out there and have fun. That’s what I always tell my kids when I watch them play sports,” said Andrews, who now teaches the game full-time at Pine Needles and missed the cut in the inaugural championship at Chicago Golf Club in 2018. “My daughter [Sarah] almost put me in tears the other day, because she said, ‘Mom, I’m going to meet you after 18 and give you a big old hug, and I’m going to love you regardless of how you play.’”

Andrews, a native of Lynchburg, Va., settled in Pinehurst in 1989 after a decorated career at the University of North Carolina, where she earned second-team All-America honors. She represented Pinehurst Resort & Country Club as a touring pro for most of her career, before injuries led her to explore other career options. She first went into broadcasting, and added teaching to her repertoire at Pinehurst, before the pull of one of the all-time legends of golf in the Sand Hills was too much to pass up.

“I got to talking to [Peggy Kirk] Bell one day and she said, ‘You need to come teach with me’ and I said, absolutely, when can I start,” recalled Andrews, who was not about to pass up a chance to be taken under the wing of the renowned teacher and owner of Pine Needles, who died in 2016 at age 95. “I would’ve definitely gone into teaching, but I think having the avenue to teach more women was what was great here. The Bell family has been wonderful to work with, I feel like part of the family, and only want the best for this facility.”

The lead instructor at Pine Needles Academy, which continues to be operated by the Bell family, Andrews estimates that she plays only about 12 rounds a year on the newly restored Donald Ross layout. When she isn’t teaching, she’s involved in real estate ventures in the area.

Other than sneaking in a few extra holes during lunch in recent weeks, it’s been business as usual for Andrews, who expected a full complement of family and friends at 7:30 a.m. on the first tee on Thursday, including both of her children and her husband, James Tepatti. Her caddie from her days on tour, Chris Fitzpatrick, flew in from California to carry her bag, but outside of that, the feel inside the ropes will be a lot different from when she was doing this full-time.

“There are so many people, both here at the club that I work with, and my family, and everybody in town that knows me as Donna the teacher, for them to be able to see me as Donna the player, I think puts extra pressure on me,” Andrews said. “When I saw that the USGA had put me off first, I was like, ‘No pressure here!’ I think I probably put too much pressure on myself last year, being the first Senior Women’s Open, and then I realized, I don’t do this for a living anymore. So I’m looking forward to going out there and having more fun this year.”

Andrews does have some local success to point to in the Sandhills – she won the prestigious North & South Women’s Amateur at Pinehurst in 1988 – but she missed the cut in her two U.S. Women’s Open starts at Pine Needles, in 1996 and 2001. While she is hoping to improve on last year’s result, the adopted hometown hero just has to look to her daughter to know what is really important.

Scott Lipsky is the senior manager of content for the USGA. Email him at slipsky@usga.org.