124 hickory enthusiasts from across the U.S. and Canada participate in the tournament using wooden clubs and wearing period attire 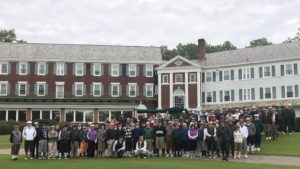 SOUTHERN PINES, N.C. – November 17, 2017 – A full field of 124 hickory golfers from 23 states and Canada teed off this past weekend in the 14thAnnual Mid Pines Hickory Open Championship at Mid Pines Inn & Golf Club.

The Hickory Open requires participants to use pre-1935 golf equipment, including wooden-shafted clubs. Players typically don period clothing including plus fours and ties. The event is played over three days on the Donald Ross-designed course, one that is valued among the best in North Carolina.

About Pine Needles Lodge & Golf Club / Mid Pines Inn & Golf Club
Nestled in the fragrant pine forest of North Carolina, you will find an experience unlike any other. For nearly a century, golfers have reveled in the serene ambiance of Pine Needles and Mid Pines Resorts. Two 18-hole Donald Ross designed golf courses have earned us our place among the country’s best  golf resorts – and one to which our guests and USGA Championships return to time and again. For more information, visit http://www.pineneedles-midpines.com/.

Sorry, the comment form is closed at this time.