This article originally published on ThePilot.com on March 24, 2019. 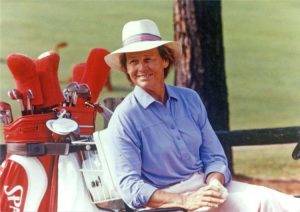 By Hunter Chase, The Pilot

Bell, who passed away in 2016 at the age of 95, was a pioneer in promoting women’s golf, a passion she carried throughout her life, including the more than 60 years she was the Grand Lady of Pine Needles.

She still is making an impact on women’s golf, with her legacy and contributions to the game a driving force behind the USGA bringing the U.S. Senior Women’s Open to Pine Needles in May.

The Senior Women’s Open, the newest national championship overseen by the USGA, is bringing its second edition to Pine Needles after its debut at the Chicago Golf Club last year.

“We looked at the Sandhills — Pine Needles in particular — its connection to Peggy Kirk Bell and the women’s game,” said Matt Sawicki recently. “With such an illustrious connection to the women’s game it made sense that we brought our second Senior Women’s Open here. Everyone (the players) has a fond memory of either this golf course or some interaction with Peggy Kirk Bell and it just reaffirmed our decision to come here.”

Shannon Rouillard and Sawicki, the Senior Women’s Open championship directors, were at Pine Needles recently in preparation for the championship that starts May 16.

It’s not just the legacy of Bell that has brought the USGA back to Moore County over-and-over again in the last 25 years — it’s the community itself.

“I think we have conducted great U.S. championships here —men, women opens, amateurs — that have been so well supported throughout North Carolina, but in particular here in Moore County and the Sandhills,” said Sawicki. “In a market like this it feels like the entire community wraps its arms around the championships. It’s not just the USGA that feels that way, but also the players. That’s why we love coming to this area. Everybody gets behind it.”